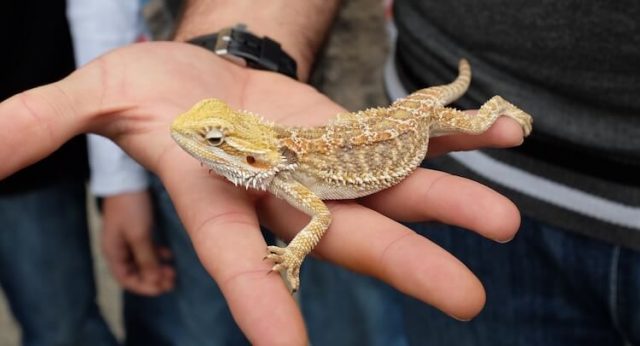 The closest you can come to owning a dinosaur is the pre-historic looking Jackson’s Chameleon. There is no mistaking this lizard with any other. The male has 3 horns. They have an independent focus eyes which gives them a 360 degree vision. Also, Jackson Chameleons can change color depending on their mood or to confuse predators trying to make a meal of them. They are known as the masters of camouflage.

A pet store owner in Hawaii purchased 36 of these in the early 70s. He allowed them to live outside, so there is also a sizeable colony of Jackson Chameleons prospering in Hawaii.

Chameleons are not an easy lizard to keep as a pet. They don’t like to be handled and stress easily. Common cause of death for these majestic looking creatures is a hunger strike. Some times this can be avoided by offering them a variety of food. Some will ignore almost everything and gobble down in huge quantities things they like. The Jackson’s Chameleon was the first chameleons to be kept successfully in captivity.

Jackson Chameleons eat primarily insects but will occasionally eat greens and fruits. Lettuce, spinach and cabbage should be avoided. As with all reptiles, their insects should be dusted with calcium. They captured their prey with their long tongue that is often 1.5 times the length of their body. Since they grow to 9-13″ long, it means their tongue can be 1 ½ feet long.

Since Jackson Chameleons are skittish, they need plenty of branches and cover in their cage. It should be at least a tall 15 gallon aquarium. If you like to handle lizards, Jackson Chameleons are not right for you. They should be kept singly or in sexed pairs. The temperature should be 73-80 in the day and 60-65 at night. The humidity needs to be maintained at 60-80%. If they are kept properly, they are a long living chameleon that could be your pet for up to 10 years.

One last interesting fact about this unusual lizard especially if you are trying to breed them. Most lizards lay eggs, but of course the Jackson Chameleon has to be different. They are sexually mature at 9 months and can deliver about 20 young surrounded by gelatinous egg sac. They remain asleep until the eggs touch substrate.

Jackson Chameleons are definitely an interesting lizard to have as a pet. They are not for beginners, but with some lizard pet keeping experience can successfully live a long time.

What Is The Best Crypto Exchange?

The Best Examples Of Promotional Products

This website uses cookies to improve your experience while you navigate through the website. Out of these, the cookies that are categorized as necessary are stored on your browser as they are essential for the working of basic functionalities of the website. We also use third-party cookies that help us analyze and understand how you use this website. These cookies will be stored in your browser only with your consent. You also have the option to opt-out of these cookies. But opting out of some of these cookies may affect your browsing experience.
Necessary Always Enabled
Necessary cookies are absolutely essential for the website to function properly. These cookies ensure basic functionalities and security features of the website, anonymously.
Functional
Functional cookies help to perform certain functionalities like sharing the content of the website on social media platforms, collect feedbacks, and other third-party features.
Performance
Performance cookies are used to understand and analyze the key performance indexes of the website which helps in delivering a better user experience for the visitors.
Analytics
Analytical cookies are used to understand how visitors interact with the website. These cookies help provide information on metrics the number of visitors, bounce rate, traffic source, etc.
Advertisement
Advertisement cookies are used to provide visitors with relevant ads and marketing campaigns. These cookies track visitors across websites and collect information to provide customized ads.
Others
Other uncategorized cookies are those that are being analyzed and have not been classified into a category as yet.
SAVE & ACCEPT